2014 marks the centenary of the outbreak of the First World War. For this special occasion, and with the help of some Time Lord magic, 12 historians will be coming over for a “Who dunnit” dinner party or breakfast to discuss the causes of World War One. It is your job, as a class, to decide on the seating arrangement.


(This activity is based on an idea by Russel Tarr)
Here are our guests: 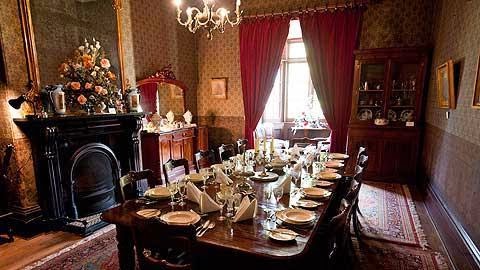 You will  be assigned an historian. For your historian, compile an information sheet (no more than one typed A4). Provide some brief background on the guest. (for example: Where are they from, when did they write their book(s), what was the response to their book, what is their area of expertise, what other books have they written etc etc).
To who and/or to what does this person attribute the outbreak of World War One? This section should contain a clear explanation of their views, and who (if possible) they agree or disagree with. Try to identify where this historian sits in the debate.
Include quotes.
Include a portrait photo and an image of their most relevant book on World War One.

You will receive everybody else’s information sheet. Read all of them. Become familiar with the view points of the other historians. Create a tentative harmonious seating plan by yourself.
The dining table will be long and rectangular, with 6 people sitting on each side. No people will sit at the head of the table.

Come together as a class to create TWO seating plans:
Seating plan 1: Plan for an harmonious party. Minimal arguments. Let people who agree or have much in common sit together. Guests who disagree should be furthest from each other.
Seating plan 2: Plan for heated debates. Let’s make it an interesting evening. Sit people who really don’t see eye to eye close to each other.

Act it out! Bring in food, some drinks and let's have some great discussions.

You have a lot of information at your finger tips.


The outbreak of the First World War in the summer of 1914 has been attributed to accident, design and confusion. Some of the different oppositional views are:

The debate is now extremely sophisticated, especially concerning the calculations and policies of the German leadership and revolves around whether Germany intended an offensive war of territorial expansion or a defensive war designed to reorder European diplomatic relations. Recently debate has centred more on short term factors such as the reasons behind the blank cheque, Russian mobilisation and competing Serb, Austro-Hungarian and Russian aims for the Balkans.

It promises to be a great year for World War One Historiography. In the first week of 2014 UK’s Tory Secretary of Education Michael Gove started a heated debate about the way the centenary of WW1 should be commemorated. Gove attacked the “Left-wing” and “the Blackadder” interpretations WW1. Twitter erupted in response and soon many respected historians weighed in on the debate. I found all of these viewpoints fascinating so I collected some of the recent articles and summarised them. Below you will find key excerpts of articles by Richard Evans, Gary Sheffield and Nigel Birrar. I outlined book reviews of Christopher Clark, Sean McMeekin and Margaret McMillan and there is a great article by History teacher John Blake. I included an old interview (YouTube) with Niall Ferguson on his book “The Pity of War” and there is a fantastic Twitter discussion between History teacher Russel Tarr and Historians Simon Schama, Tom Holland and Gary Sheffield.

Richard Evans on Causes of WW1


My highlights of the article:

Full article here: Was Britain Right To Go To War In 1914? | Standpoint


Review and explanation of Christopher Clark’s “The Sleepwalkers: How Europe Went to War in 1914″


My highlights of the article:

Review of three books, by MacMillan, McMeekin and Hastings: How recklessness, unstable alliances and bad luck plunged Europe into crisis


Niall Ferguson: WW1 was unnecessary. Interview about his book “The Pity of War”

Oxford historian Niall Ferguson reviews the world’s oldest motives for war, and concludes in his book, “The Pity of War” , that World War I was unnecessary. (Originally aired November 2000). He also engages in “What if” History. What if Germany had won? Ferguson argues it would not have been that been that bad. Richard Evans shares that view, but people like Nigel Birrar and Michael Gove say that WW1 was a just war for freedom against German aggression.

The first world war was far from futile, by Historian Gary Sheffield

Gary Sheffield is Professor of War Studies at the University of Wolverhampton.

Antony Beevor, British historian. A former officer who served in England and Germany for five years. He has published several popular histories on the Second World War and the 20th century in general.

Russel Tarr, a UK History teacher working in France has been in the centre of the History wars when Michael Gove singled out one of his worksheets on his popular history site activehistory.co.uk. The worksheet used Mr Men to retell the rise of Hitler.

Historians Gary Sheffield, Simon Schama, Tom Holland and Sir Richard Evans all participate in the tweet chat. Below is a worksheet with a Twitter conversation regarding the causes of WW1.
Download the conversation and worksheet here: ww1_on_twitter